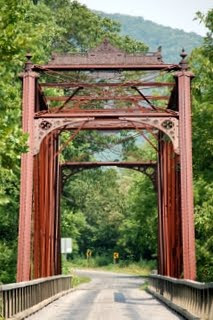 This historic bridge is located about 2.6 miles from Eagle Rock in Botetourt County, Va. It is one lane across Craig's Creek on Rt. 685. The roadway is made of wood.

The bridge was constructed in 1887 and was one of the first steel bridges in this end of Virginia. It is called a Phoenix Bridge because it was built by The Phoenix Bridge Company of Phoenixville, Pennsylvania.

The bridge is on the National Register of Historic Places.

Iron instead of timber use in bridges began around 1840; two iron bridges were built across the Erie Canal in New York about that time.

In 1850 an iron railroad bridge collapsed, which set the use of iron back a bit.However, by the 1860s it was in demand and after the Civil War there was a boom in bridge-building.

Many companies formed to take advantage of the need, including the Phoenix Bridge Company.

The Phoenix Company's distinctive product was the Phoenix post, a compression member composed of four flanged segments riveted together, which is used in this bridge.

It is formed of rolled wrought iron.
Posted by CountryDew at 11:11 AM

You may use the Subject Guide below to find stories in your area of interest.

Check back frequently for updates, and thank you for visiting!

My family has lived for generations in Botetourt County, Virginia. I have been a journalist for 25 years and have a strong love of the county and its history.

Please feel free to write me with questions!

Botetourt History is a project of Anita Firebaugh, a Botetourt County freelance writer and amateur historian. Her articles appeared frequently in The Fincastle Herald, Botetourt County's newspaper, and she has written for numerous other local publications. She has won a dozen Virginia Press Association Awards for her writing and photography.

This site uses cookies from Google to deliver its services, to personalize ads and to analyze traffic. Information about your use of this site is shared with Google. By using this site, you agree to its use of cookies. Learn
more.

This site may also use cookies from other sources. By using
this site, you agree to any use of cookies.