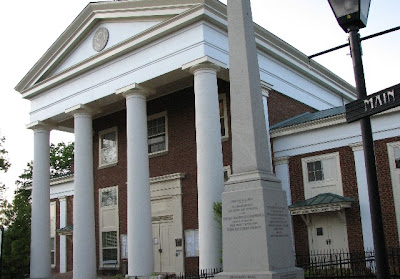 The Board of Supervisors approved the designation in honor of the popular judge after Honts died in March of that year. Prior to his death, he had announced his retirement after being diagnosed with an aneurysm.

The judge served Botetourt and Rockbridge Counties for nearly 21 years.

In a resolution, the supervisors said the judge presided over the court “with extraordinary distinction, grace, wisdom, good judgment, good humor, and humility.”

The resolution went on to say that Honts established within the court system a “tradition of gentility, courtesy, and evenhanded respect for all citizens” by his example and good character.

*A version of this story was originally published in The Fincastle Herald in 2004.*
Posted by CountryDew at 9:14 PM

You may use the Subject Guide below to find stories in your area of interest.

Check back frequently for updates, and thank you for visiting!

My family has lived for generations in Botetourt County, Virginia. I have been a journalist for 25 years and have a strong love of the county and its history.

Please feel free to write me with questions!

Botetourt History is a project of Anita Firebaugh, a Botetourt County freelance writer and amateur historian. Her articles appeared frequently in The Fincastle Herald, Botetourt County's newspaper, and she has written for numerous other local publications. She has won a dozen Virginia Press Association Awards for her writing and photography.

This site uses cookies from Google to deliver its services, to personalize ads and to analyze traffic. Information about your use of this site is shared with Google. By using this site, you agree to its use of cookies. Learn
more.

This site may also use cookies from other sources. By using
this site, you agree to any use of cookies.